In May 2013 / 7 years ago, I embarked on a journey that would change my life forever and it was very much not a given that the outcome would be a happy ever after…it could very much have ended in ‘you are not good enough for my daughter you bearded, curly haired foreigner’.

I was between trips in Toronto at the time and caught a flight via El Salvador (where I was almost detained) to Cusco, Peru. I had met the love of my life and I went on an expedition to meet her family and more specifically Papa y Mamma. With no small task ahead of me…to ask for her parents’ blessing on our future and to lay the foundations for asking for her hand.

A friend of mine had inspired me with his story of asking his future in-laws in their native language, Japanese. I was thus determined to do the same – only for me it would be in Spanish. Side note for all you romantics and folks that honour tradition: this was a defining factor and a practice that should be respectfully followed.

Amongst all the other preparations – I wrote my piece, translated it, gave it to Nancy to double check, which scored me some points with her and finally I memorised it.

I arrived in Cusco, interestingly for the second time in my life and the same year, ready and courageous. I was not afforded more than two hours to check-in, freshen up and off we went to the Big Meeting!

I remember friendly smiling faces with the appropriate amount of interest and concern for their beloved Nancy. Abuela (Grandma) had traditional Peruvian hot chocolate and corn cake ready, (this is something you need to try, yummie!) After the initial welcome and blundering about with my first attempts at Spanish, the fires were lit and the table set for lunch. The same table where I would later make my speech.

This day and all that happened are fondly stored in my memory forever and is a combination of excitement, anxiousness, experiences, flavours, applause, smiles and instant acceptance. I will never forget her father’s words, “We love her, she loves you and thus we will love you.”

I stood there in front of a group of strangers, as I did so often during my guiding and tour leading days. I addressed them and they listened. They responded with the warmth and acceptance that I had hoped for, and at the same time, was so surprised by. My now father-in-law delivered a heartfelt response and then…we ate, we ‘cheersed!’ and we celebrated this meeting and unexpected special occasion.

As I made clear that day, I still am serious about your daughter and want to provide for her and build a life with her and I must admit every day since then has been a blessing with her. We have been married for nearly 6 years now. And it all very much depended on that noteworthy day in Cusco, Peru. 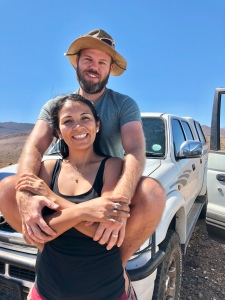 Welcome! We are Nancy & GP, a Peruvian – South African couple with a big passion for travel, adventure and the outdoors.

In our blog we share our experience of living & exploring South Africa and our adventures around the world.

Exploring the longest white sand beach in the Southern Hemisphere
Another beautiful day in Cape Agulhas ☀️
Isabel is 10 months today!
Enjoying some time with the family in Stanford 🤩
Traveling mom and baby ✈️
Enjoying time with this little babe ❤️